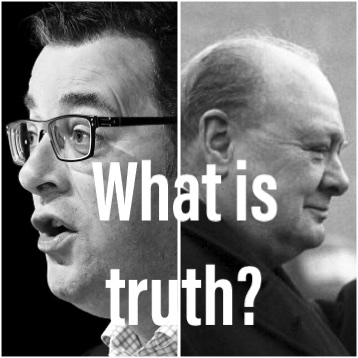 I believe this somewhat cynical question was first asked by a former Italian administrator in what is now Israel some time ago.

But it’s still as relevant as ever.

Most professional communicators these days realise that telling the truth is not just the ethically correct thing to do, it’s also the most effective technique in the long run.

How many PR people have been in meetings with some business leader in trouble and heard something along the lines of “How much money do I have to pay you people to make this go away”?

The only realistic answer is, of course, to say PR doesn’t work that way and if there’s something that’s gone wrong you need to admit it and commit to fixing it and doing better in future.

Having a communications culture in which you reward getting the “right” messages out and ignoring anything negative inevitably leads to disaster.

The current apparent collapse of Afghanistan is a case in point.

The Guardian quotes congressional testimony last year from the US Special Inspector General for Afghan Reconstruction John Sopko about the problems attempting to get accurate information out of American officials.

“The problem is there is a disincentive, really, to tell the truth. We have created an incentive to almost require people to lie.”

A culture of putting a positive spin on things and not passing bad news up the chain of command or letting the public know just how bad things are has led to a situation where the Taliban seemingly abut to overrun Kabul.

The emphasis on needing to give out positive information and downplaying negatives may also be playing a role in the pandemic response.

Here is Australia there are people who have grown cynical at official responses, questioning initial sunny optimism about “two weeks to flatten the curve” and wondering aloud what else “they” are lying to us about.

They weren’t lying of course; I believe our national and state leaders were simply trying to project an image of knowledge and competence.

But in fact, as has become apparent, there was a lot they didn’t know.

But we live in a communications culture that doesn’t seem to value saying things like, “I don’t know” or “Things are actually pretty tough and I can’t tell you when this is going to be over”.

So, when events spin out of control, as they are doing right now, people feel as if they’ve been lied to.

One of the things that made Winston Churchill such an effective leader was that he wasn’t afraid to tell people just how bad things actually were.

Perhaps if our leadership emphasised improving the reality rather than the image and didn’t mind appearing not fully in control when they’re really, really not, people might trust them a bit more.