The computer uprising is gaining attention! 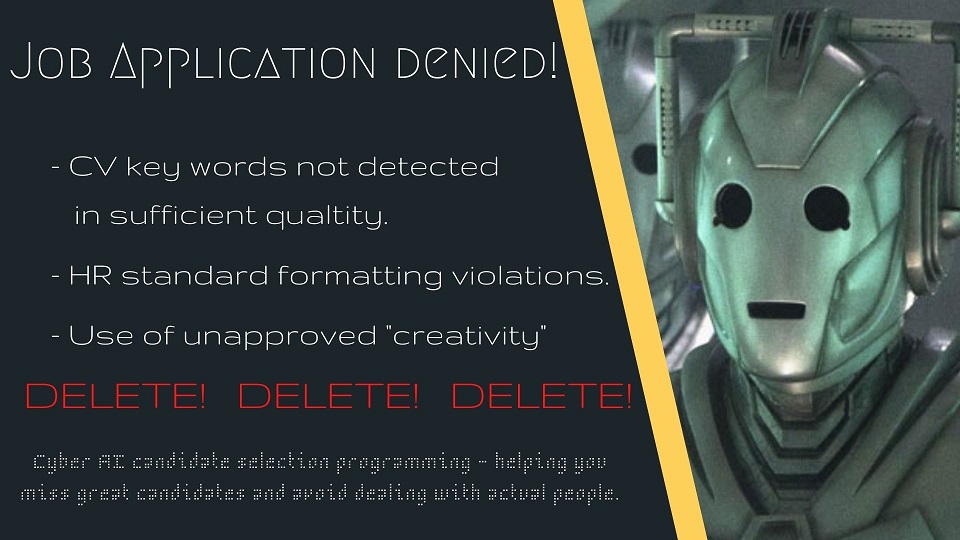 The three most satisfying words in the English language are “I was right”.

And that’s what I thought as a read an article in Vox recently, “Why everybody’s hiring but nobody’s getting hired”.

It backs up something I said in an earlier blog post critical of the role automated software is playing in recruitment these days.

That item, “Computer says no” attracted my best ever engagement by a single post on LinkedIn – 1,454 views!

So, as well as feeling pretty pleased with myself that I’d obviously touched a bit of a nerve, it was quite comforting to see the Vox article essentially saying what I had already said about companies potentially missing out on hiring great candidates because computer software is filtering their CVs out.

It quotes J.T. O’Donnell, the founder and CEO of career coaching platform Work It Daily, as saying this kind of CV filtering software makes it easier for the employer, but not the job seeker.

“You’re not getting rejected, you’re just never getting past the technology” he says.

To be fair, you can understand what companies doing the hiring se this kind of software as a useful shortcut.

What HR department has time to wade through so many resumes?

Also, many companies appear to have unrealistic expectations, constantly adding requirements to job descriptions until there’s not a person on earth which could possibly fit the bill.

The Vox article explains, “The endless quest to make hiring efficient has rendered it inefficient. Candidates who are great fits for 90 percent of the job are screened out because they’re not perfect for the other 10 percent. Recruiters are so inundated with résumés flowing in online that they only look at the first few, hiring the people they can get the fastest instead of the people who are the best fit”.

In my own area, communications, I have wondered about he realism of some job descriptions and key selection criteria.

Some seem to be demanding recent graduates with 20 years’ experience who are social media gurus, SEO experts, having a massive networks of media contacts, capable of writing a speech that would make Winston Churchill weep with envy and able to shoot, edit, narrate, and post Hollywood-quality videos while suspended upside down from the ceiling with their hands tied behind their backs.

How many of these paragons exist in the real world, I wonder?
I have no answer to this problem, except to point out that it exists and now others agree with me.

So, I was right. Can I put that in my CV or will it only anger our robot overlords?